Alternate Texts: The Master Hath Come and He Calls Us to Follow; Sent Forth by God’s Blessing; On This Night, Most Holy, in Circumstance Lowly; An Eagle Is Soaring and Turning and Diving; A Wedding Took Place in the Village of Cana

Fun Fact: Using a male pen name, Katherine Davis wrote not only the text to Let All Things Now Living but also composed the popular Christmas song The Little Drummer Boy (original title: Carol of the Drum) which was made famous by the Trapp Family Singers. 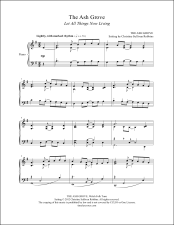 Since its first published appearance as the secular song Llwyn Onn in 1802, three enduring hymn texts have been written for the tune The Ash Grove: English novelist and poet Sarah Doudney penned The Master Hath Come and He Calls Us to Follow (1871); Katherine Davis, under the pen name John Cowley, wrote Let All Things Now Living (1939); and World Library Publications founder Omer Westendorf authored the text Sent Forth by God’s Blessing (1964). Recent texts for the tune include three written by Carolyn Winfrey Gillette, one by Susan Peterson, and the Christmas text On This Night, Most Holy, in Circumstance Lowly by R. Michael Cullinan.

As with most dance-type folk tunes, tactus and tempo are two key elements to consider when leading this hymn in assembly singing. It can be tricky to find the right balance that allows singers to clearly pronounce the words without dragging. Feeling the pulse as the dotted half note1, keeping the eighth notes light and leading toward the next downbeat, and – most importantly – giving singers opportunities to breathe can help.

Because of its very singable melody this hymn does, however, have one annoying side effect: it will be stuck in your head for the rest of the day!

This site uses Akismet to reduce spam. Learn how your comment data is processed.

Sign up to be one of the first to learn about new music releases!

By clicking submit, you agree to share your email address with Christine and her newsletter distribution service, Mailchimp, to receive emails from Christine. You can use the unsubscribe link in those emails to opt out at any time. Your email address will not be sold or shared with anyone else.

Find by Title, Tune or Topic

I craft and publish downloadable sheet music to help busy church musicians set the right tone for worship services, weddings, and memorial services. I’m also really picky about clear, detailed notation so you can be sure to get a quality score. (More about that here.)