Skip to content
Something to listen to while you read…you can find the sheet music at Sheet Music Plus.

All links to Sheet Music Plus are both commission-based and affiliate links.

Just like in this past Sunday’s Red and Rover comic strip, looking at music with a different perspective is one of the fun parts of arranging hymns into new sheet music. Seeing old music through new eyes can mean changing the meter from duple to triple or it can mean adding a syncopated rhythm as the underlying beat or it can mean taking a hymn outside of its usual context – which is exactly what I did with this arrangement of Kumbaya, My Lord (Come By Here). 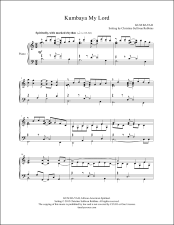 A meditative folk-song, Kum Ba Yah‘s origin has been debated over the years but it’s now widely accepted that it developed as an African-American spiritual in the American South. Although there isn’t one consistently accepted version of the text, the hymn is known internationally and sports the tune name Desmond in some hymnals, after the South African archbishop, Desmond Tutu. Unfortunately, Kum Ba Yah has waned in popularity since the 1980s and, outside of children’s singing, it’s gained a reputation for being treacly, superficial, and not a “serious” hymn.

But I would argue for a different perspective.

It takes real courage to repetitively ask (almost demand!) God to “come by here” as we do in this hymn – whether we’re “crying”, “singing”, or “praying”. And we can celebrate the fact that we have the right to courageously ask for the Creator of the Universe’s presence no matter our situation. So, viewing Kum Ba Yah from this angle, I created a zany, syncopated, high-energy arrangement (with a mellower middle section for those who are “crying.”) One that sounds like we’re boldly jumping up and down, wildly waving our arms, and loudly clamoring at the Almighty, “Hey, God! Over here! We need you over here!”

There’s nothing treacly or superficial about that. 🙂

This site uses Akismet to reduce spam. Learn how your comment data is processed.

Sign up to be one of the first to learn about new music releases!

By clicking submit, you agree to share your email address with Christine and her newsletter distribution service, Mailchimp, to receive emails from Christine. You can use the unsubscribe link in those emails to opt out at any time. Your email address will not be sold or shared with anyone else.

Find by Title, Tune or Topic

I craft and publish downloadable sheet music to help busy church musicians set the right tone for worship services, weddings, and memorial services. I’m also really picky about clear, detailed notation so you can be sure to get a quality score. (More about that here.)